Clickomania for the iPhone – finally! The saga goes on. Great!
Unfortunately, it is not my opus. I lack the time for software development at the moment, so I don’t mind that R2 Soft has created the Clickomania app for the iPhone, the iPod Touch and the forthcoming iPad. I have some suggestions for them, though. 😉 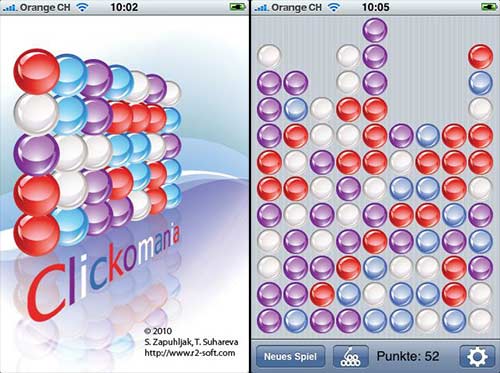 Clickomania is, of course, absolutely perfect for to be played on a touchscreen.

And the iPhone app provides a good adaptation. The tiles have just the right size: Big enough for a fast playing, but not too big. Nine columns and 12 rows is almost the same configuration as in the default game of Clickomania next Generation. The game somehow reacts a little sluggish on my device. If you tap on a group of stones, it takes just a fractal of a second too long for a real tapomania.

By the way… I would have called the touchscreen version of the game Tapomania, but as a mentioned, I am happy that the name Clickomania lives on. And since I keep the name “Tapomania” a secret, I can use it anytime myself, when doing a version for the iPhone platform. 😉

I know, I know. Someone has had the idea before.

Back to the review: Probably, the game runs just fine on an iPhone 3GS (I used the 3G) and I reckon that it’ll be a blast on the iPad. But still, some performance optimizations would be great for older devices. Should not be so hard to do. 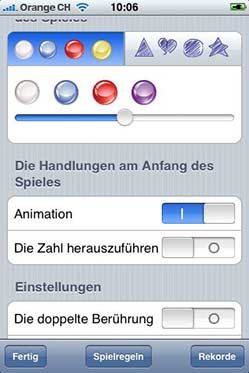 In the configuration screen, there are two different tile sets offered. One shows rendered balls, one hand-drawn tiles. With a slider, the number of colors can be selected within a range from two to six. Animations can be switched on and off, and you can choose if you want to see a screen with the values of the tiles at the beginning of a game. You can select whether or not you want to be able to start a new game by shaking your device.

There is an option that makes the game act like Same Game. If activated, it takes two taps to remove a group of tiles. One to activate, one to confirm. I never liked that option; it just slows down the game playing unnecessarily. I have not implemented it in any Clickomania version and so, I don’t care for it in the iPhone version.

By the way, the German translation is almost incomprehensible. For instance, «Die Zahl herauszuführen» does not mean anything. You probably want to call this option «Kugelwerte anzeigen» or something like that. Even worse: The rules. They do not explain anything. To use machine translation without any editing is no good idea.

I never had different tile values, so there was no need for a screen with tile values. And immodest as I am, I like my counting algorithm better. I am convinced that the playing speed needs to be considered in the score.

A little problem I have noticed with the undo button. It is often tapped unintentionally, because it is located just below the lowest row. Maybe, it would be better to have the game controls on the top of the screen. Or it would be great to have a gesture for undo – a slide with the finger from right to left, for instance!

I don’t like that the columns slide to the right if a column is cleared, but that’s a minor thing.

As a conclusion, I like the game as a version 1.0. There is a lot of room for improvements. Online scores, for instance. And if you have a global ranking, you need equal settings for everyone. That means some form of game sets, levels or whatever you like to call them. I would have implemented such a thing in the version 1.0, since it’s difficult to change it in a later version. That’s why I have done Clickomania next Generation as a spin-off from the original version.

I would love to see more support for the touch screen and the accelerometer. For example a rearrangement of the tiles if you switch the device from vertical to horizontal. The tiles should fall with some physical logic into their new positions. That would give some great game options. It would add a real “iphony” feeling and of course, the animation for the retiling would simply be eye-catching.

Finally, a suggestion in my own cause to the hands of R2 Soft. Of course I know that I have not registered Clickomania as a trademark. And I have no money for lawyers. But still, since you use the name, it would be nice to acknowledge the work I have done to promote Clickomania as a “brand” (please note the quotes). I would consider 5¢ a fair “license fee” (please again, note the quotes), since you sell the game for 99¢. Please contact me for my bank connection. And again, thanks for carrying on the torch!