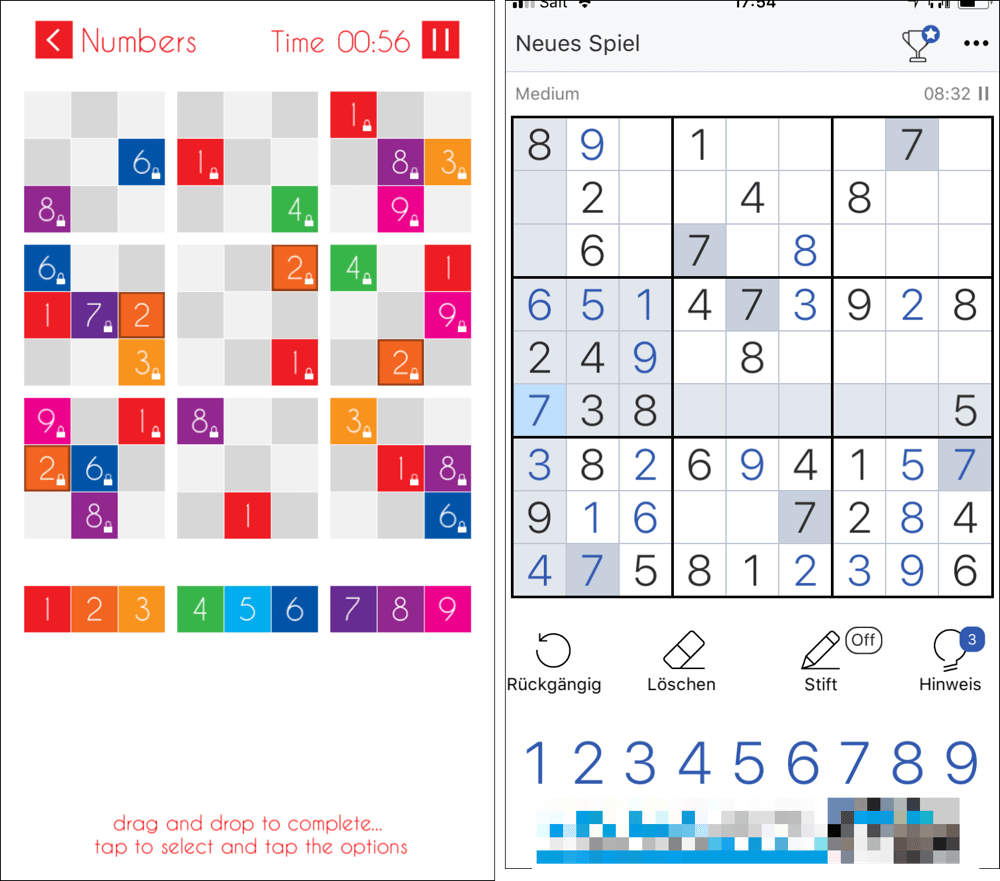 Sudoku Pro Edition This is a simple Sudoku version that does not reinvent the wheel and does not shine with a special variety of functions. But what I like about it is the color marking of the number fields. Each number has one color: one is red, two is orange, three is yellow, and so on. This makes it easier to find your way around, as the distribution of the numbers is recorded more quickly and intuitively on the basis of the colours.

There is also the possibility to play with colors only, which is a little unfamiliar – but gives the game an extra kick. In addition, you can also play with letters or brand logos (Twitter, Instragram, Pinterest, WordPress, Google, Windows, Torrent and – for whatever reason – Playboy). Which is a little less compelling.

Conclusion: An original approach, which might just be right for the hardcore Sudokuians.

Sudoku von Easybrain This variant also satisfies ambitious Sudoku players with the pen function: With this you enter the possible numbers in a field and can also use them like the negative grid, the intersections, naked pairs, chains, wings or fishes. I do this only during the holidays – if I play Sudoku in the suburban train, then only with games that can be solved without pencil markings.

The highlight of Easybrain is the area markings. They show which fields influence the currently selected number, i. e. where the same number cannot be used. This gives quickly a good overview.

On the other hand, there is the daily challenge. This is a feature that I like a lot, for example at Microsoft Solitaire Collection. Of course, you have to make sure that if you take part in several daily challenges, that you still have enough time for your gainful employment. But this is a downstream problem. Too bad: You don’t get a ranking list or at least some statistical feedback on the daily challenge. Of course, one would like to know how one has fought against the world’s population. 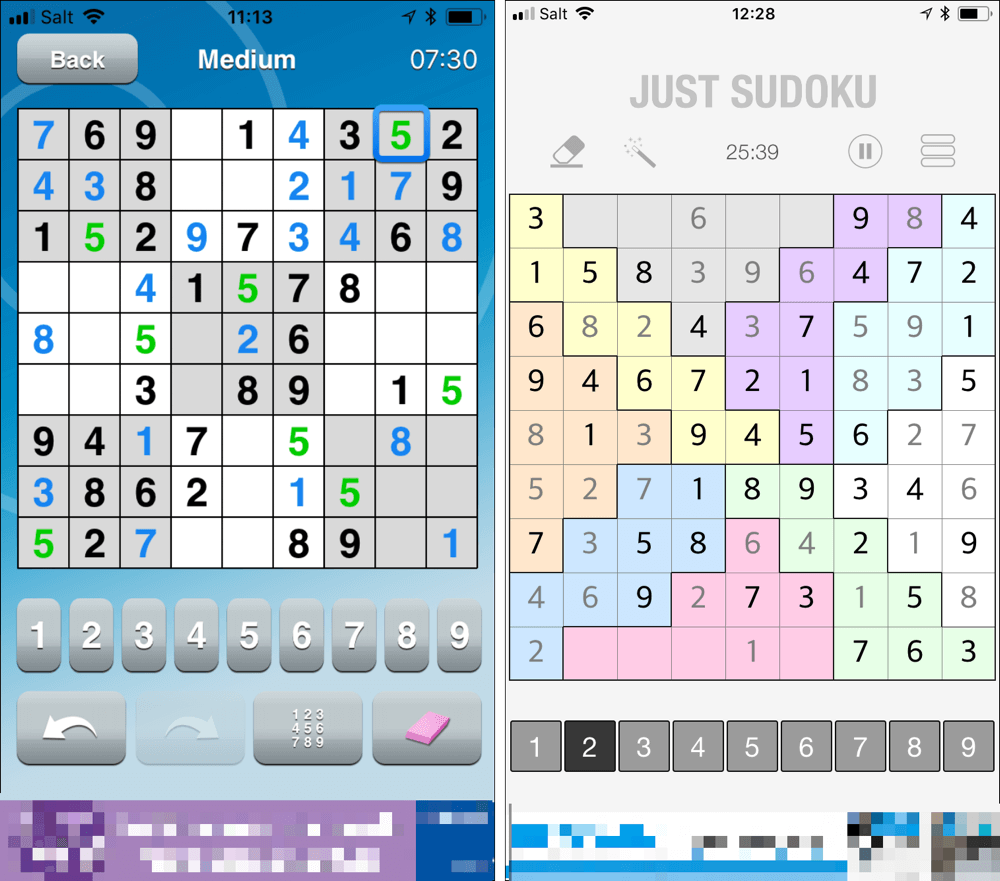 Sudoku 🙂 has a somewhat penny graphic. But I like the colour marking. If you type in a number, you can see its distribution on the field. Apart from that, there are statistics on the games played and integration into Game Center. There you can compare yourself with others. Speaking of which: According to Game Center, Rumcake Mama solved a Sudoku game of difficulty level medium in 20 seconds. It is the best of 1,57 million players. And I wonder:

20 seconds!!11!!? If, say, half of the 81 fields were free, then she would have had to fill out two fields per second – that alone is difficult from a motor point of view. So I wonder how hackable Game Center is.

Just Sudoku is a minimalist version that doesn’t provide any assistance and doesn’t even make mistakes visible during the game. But you can check the Show errors in the settings.

In the options there is also the Smart buttons option. It ensures that the not allowed numbers are hidden in the selected field. This is, of course, a feature that encourages fraud: You can simply select one field after the other until you get one that only allows one number.

There is also the Jigsaw game mode, where the blocks of nine are not square, but irregular. The normal Sudoku rules – each number only once per block, row and row – still apply. This means that some of the strategies that have gone over into flesh and blood are not applicable. I don’t get really warm with the puzzle variant, even if it’s really a change of pace.

👍 Sudoku Puzzle World is a bit annoying, because it already displays advertisements before you can start a game. Apart from that, it is the most beautiful variant presented here: With nice background pictures, discreet animations and highlighting of the marked number on the playing field you can do nothing wrong as a casual player (👍). There is also a note function. What I like about this version is that when you enter a number, this number is automatically deleted from the notes. With many other apps you have to do this manually. Of course, it would be the same with games on paper. But that’s a very dull job, which the app can gladly do for you (see option Clear incorrect notes after each correct anwer as well).

You can change the background image in the settings and there is a Game Center integration. The bad German translation and the obtrusive advertising are to be criticized. If you want to get rid of them, it costs three US-Dollars. 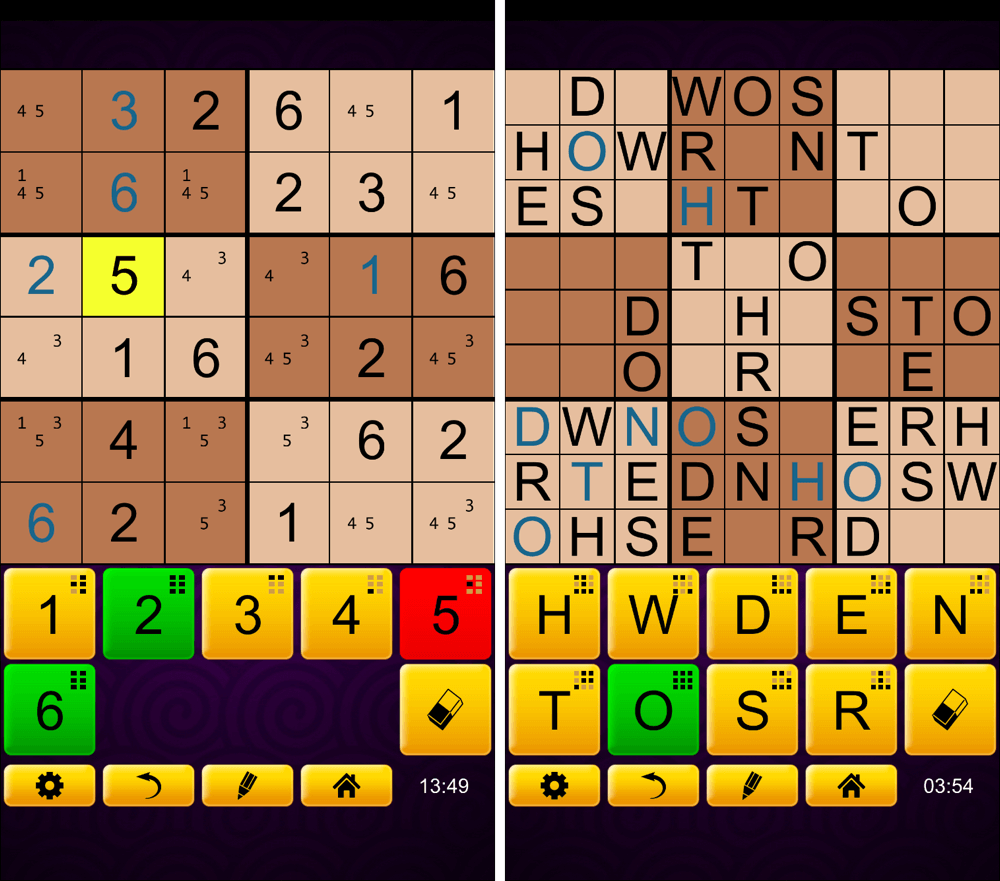 Sudoku Epic: Oblique variants such as the Six-Sudoku and Wordoku.

Sudoku Epic offers a special, fast game variant with 6 fields. Whereby, fast is the wrong expression. I played longer at first than a normal, simple or medium Sudoku. On the one hand, because it was unusual. On the other hand, because there were relatively few fields filled out in advance and I had apparently caught a game that could only be solved with notes at all. After all, you can have the notes filled out automatically – of course, that’s cheating, but entering the possible numbers by hand is also a very tedious matter. Anyway, the 6×6 game mode is much easyier to learn than the Jigsaw variant mentioned with “Just Sudoku”.

Also annoying here are the many advertisement interrupts, as well as the unusual playing mode: You have to select the number below the playing area, then touch the square where you want to place the selected number. Since it’s the other way round in all other games, you are constantly placing the wrong numbers. However, you can fix this by switching to the option Select a cell first.

In addition to the 6×6 grid field, Wordoku and Killer Sudoku can be played, plus a daily challenge. Wordoku has letters instead of numbers, which makes things a bit more difficult: you have to remember which letters are in the game. For this you will be rewarded with a solution word, which should result in the diagonal. Killer Sudoku has additional color-coded areas that contain a small number. The number specifies the sum of the inserted digits. Nothing for me either, because I don’t really want to do mental arithmetic.

However, if you like variants, Sudoku Epic is a good choice. Buying the in-app to remove the advertising, plus a few more bonuses, costs 3 US dollars.

Sudoku 3D is exactly what you’d expect, three dimensional Sudoku: You can see three Sudoku games that you play simultaneously or in parallel. The highlight: There is a block that is the same for all games. It is the one that is located at the foremost corner of the cube on all surfaces. If you can’t make any progress on one game, you will continue to play until you get a number in the block.

The question is, do you want to play that? My answer…. Eek, no. Switching between three Sudokus is for masochists. But maybe there’s one among the readership. Or those people who finish their games within twenty seconds: The triple variation extends the fun to 60 seconds. 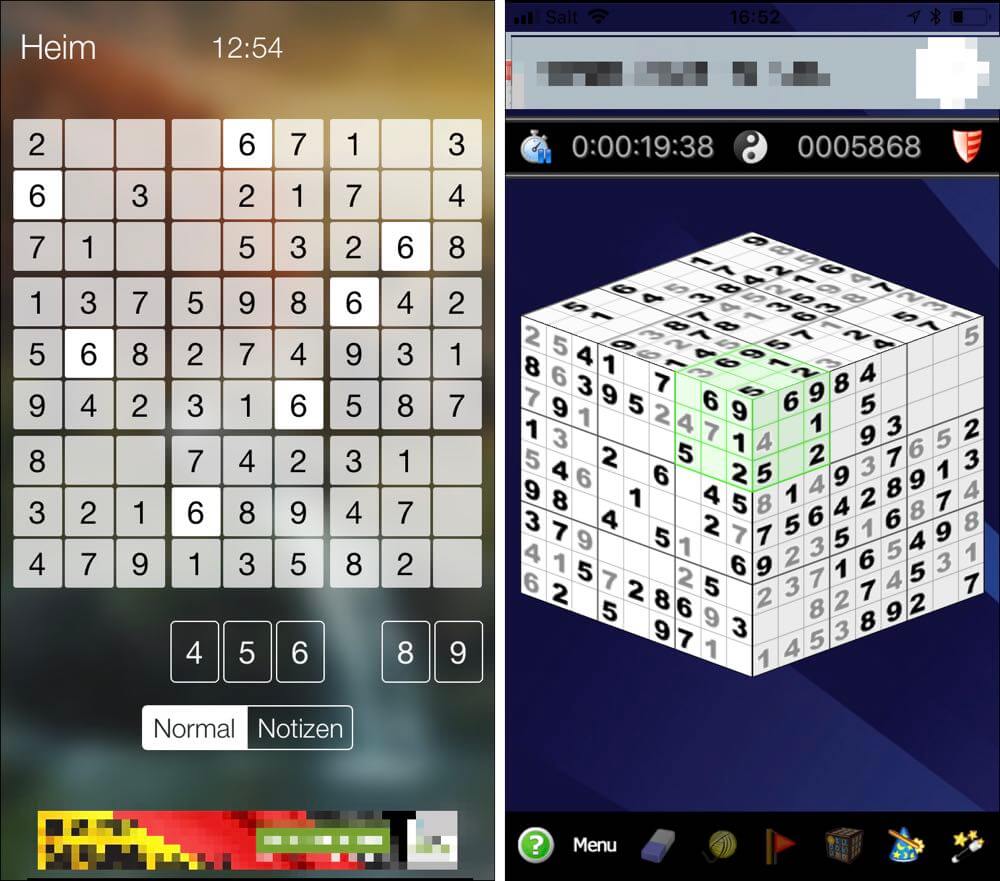 This is an experiment – an English version of a recently published article in German, translated with the help of Deepl.com (and some personal polishing). Do you value this service? Please express yourself in the comments!